Well today:s new episode was ok. Back to more 4th wall/cutaway stuff. Which we will have to live with for the show. I still hope we will see it toned down like we seen in a couple of episodes. Now for the plot of episode we have venom returning again in another host. It was an interesting angle having harry taken venom and trying to control it. To be a hero and try to prove to his father he is great. Some nice developments there. Also I felt they where tring to piggy off venom like a drug like in comics harry did become an addict for a time. So I thought the harry plot was good.. and it was nice peter was trying to protect harry and not out him to shield and fury. It was also a little funny with peter being sick and trying to do the hero stuff. Overall it was still an ok episode.

Well today was double dose of thor in marvel animation. First up in usm. I thought thor/loki and asgard stuff was pretty good. They did draw heavly from thor movie looks which wasn't a bad call there. Thor as a frog was funny and lead to some silly interactions. Overall the theme of working together and using each members strengths as key to defeating villains was good. Sure there the usually cheesy puns and cutaway stuff. But it was a ok episode. Not the best out of usm but wasn't all bad.

Few weeks ago, Jeph Loeb's facebook page was taken down, after it was swarmed with hateful messages, and negative criticism from outraged Spider-man fans towards the currently running, and controversial, Ultimate Spider-man cartoon.

And now it seems "Man of Action" (the main writers of the show) have disabled comments after hundreds of negative comments towards Ultimate Spider-man were posted on their page.

Ultimate Spider-man airs weekly on DisneyXD. The show is currently on a short hiatus, with new episodes scheduled to debut on Sunday June 17th.

UPDATE: While there are still some negative comments visible, a huge amount was removed by authors of the Man of Action facebook page.

Well that is a bad call there. You think they would have equal access to comments. And like any company take feedback and use that to improve things.

Well marvel/disney has renewed the show for a second season:
http://m.hollywoodreporter.com/live-feed/ultimate-spider-man-renewed-season-2-disney-xd-335383

The cable network has renewed animated hit Ultimate Spider-Man for a second season, The Hollywood Reporter has learned exclusively.

The series, which was used to launch the network's Marvel Universe programming block, has been a constant performer for the youth-skewing cabler, posting gains in total viewers and across boys ages 6-14, 6-11 and 2-11.

The creative team behind the animated series, which includes co-executive producers Man of Action Studios as well as creative consultant Paul Dini, will return for Season 2. Ultimate Spider-Man scribe Brian Michael Bendis (Powers) also will return as consulting producer and pen additional installments of the series.

Season 2 will feature Spider-Man teaming with other heroes from the Marvel Universe including the Avengers as well as exploring the origin of S.H.I.E.L.D. trainees with more revealed about Nova, Iron Fist, Power Man and White Tiger.

Added Disney XD vp and GM David Levine: "As the anchor of our Marvel Universe block, Ultimate Spider-Man Season 2 will be back with more humor, villains and adventurous storylines that boys (and girls) will love."

Take a look at this story:
http://www.bleedingcool.com/2012/06/19/the-boy-who-hated-ultimate-spider-man/

The Boy Who Hated Ultimate Spider-Man 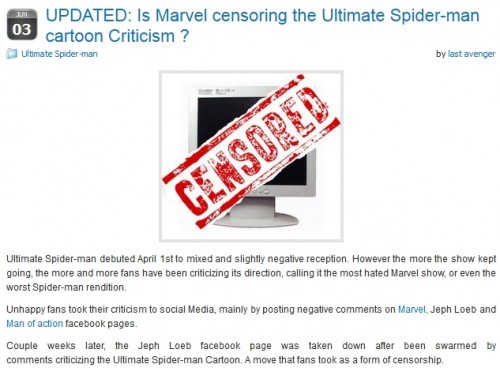 Ultimate Spider-Man is a successful show on Disney XD, with decent ratings, audience reaction and the kind of thing a broadcaster likes to hear. It was recently renewed for a second season.

For some, however, it’s not enough. Specifically, it’s not the Spectacular Spider-Man animation show that preceded it, which had a very different style, and an older demographic.

And there is one internet user called Nabil Elmjati who seems to have started a one man covert war against the show and Marvel Animation.

Since Ultimate Spider-Man began running, every Sunday he’s tweeted to Joe Quesada about how so many fans hate the show and wanted Spectacular back.

It was enough for Joe to take the bait. He told Nabil that if the show wasn’t to his liking, then he should just stop watching and that the production team were already working on season 2. Nabil agreed.

Because, despite denials, Nabil appears to have created the site Marvel TV News which runs stories about Marvelk animation and games, but mostly about how awful the Ultimate Spider-Man cartoon is, and how everyone hates it. It is registered to a “Nabil Mjati” in Morocco. So, you know. That’s him.

And then he posted the news that the Avengers Earth’s Mightiest Heroes would be cancelled and replaces with the cartoon Avengers Assemble. He also quioted from a press release, purported to be “print only”, saying “The Avengers: Earth’s Mightiest Heroes won’t be renewed for the 3rd Season. Marvel Animation will present their newly developed series Marvel’s Avengers Assemble in 2013.”

Which was picked up verbatim by sites all across the internet, some like Comic Book Movie, Oh No They Didn’t, CBR, Critiques For Geeks, giving credit to Marvel TV News, others like iFanboy, ScreenRant, Geek Tyrant, Super Hero Hype, Comic Vine

Only problem was that the quote was made up. There was no official press release. It was a lie that few chose to question.

There is certainly the rumour that Earth’s Mightiest Heroeshas been cancelled. It may well be replaced by the new Avengers Assemble. But no official word. Marvel TV News made up an official quote and all the websites followed suit without checking.

It gets better. Nabil also directed people on Twitter to Jeph Loeb’s Facebook page, where Loeb was being bombarded by negative comments about Ultimate Spider-Man. So much so that Jeph had to take his Facebook page down.

Except Jeph doesn’t have a Facebook page, there’s just an Author page which doesn’t take comments. It looks like Nabil may have created that too, and recruited people to write such comments. Facebook were informed of the situation and took it down.

Now there’s a Hitler Downfall video attacking which Marvel TV News”discovered”, posted and tweeted around. Did they discover it? Or did Nabil create that too?