Some concept artwork for usm:
http://comicbookmovie.com/fansites/joshw24/news/?a=43761

Not bad but I think I'd prefer something a bit more in line with Mark Bagley's art style. He has a pretty unique style, it's already somewhat cartoony and is a natural fit for animation. Why that isn't being utilized more significantly (overly lanky figure Spider-Man, oversized white eyes, etc) is beyond me.

propably there reason to show he is young lol, but the art isnt that bad and is only concept work. so the final stuff may be very different.

Why is it that both Batman and Spider-Man can have MULTIPLE cartoon series put out, end, then put out again year after year, but Superman hasn't had his OWN since STAS ended in 2000?

Apologist Puncher wrote:Why is it that both Batman and Spider-Man can have MULTIPLE cartoon series put out, end, then put out again year after year, but Superman hasn't had his OWN since STAS ended in 2000?

Something else, check out the new Green Lantern cartoon. Do you really want animation like that? Because I feel like that's probably what we'd end up with.

ya 2d with good details/cg enhancements are nice way to do things. I have nothing against cgi animation i have loved alot of cartoons that were done that way. But some cg stuff does suck. But ya weird how batman/spidey are the only ones that have had the most series. And superman/xmen/etc.... have had limited series.

And something else, Spider-Man has been characterized by his problems. Constantly facing eviction, having a hard time getting a date, etc. But I can't remember ever seeing shit like that in any of his cartoon shows. I've seen a respectable number of episodes too so I'd like to think I'd have at least heard about that stuff if it was in there. But, as far as I know, it isn't. He's usually written as just another superhero.

So, um, wtf is the difference between him and Superman in that kind of writing style?

And something else, Spider-Man has been characterized by his problems. Constantly facing eviction, having a hard time getting a date, etc. But I can't remember ever seeing shit like that in any of his cartoon shows. I've seen a respectable number of episodes too so I'd like to think I'd have at least heard about that stuff if it was in there. But, as far as I know, it isn't. He's usually written as just another superhero.

So, um, wtf is the difference between him and Superman in that kind of writing style?[/quote] 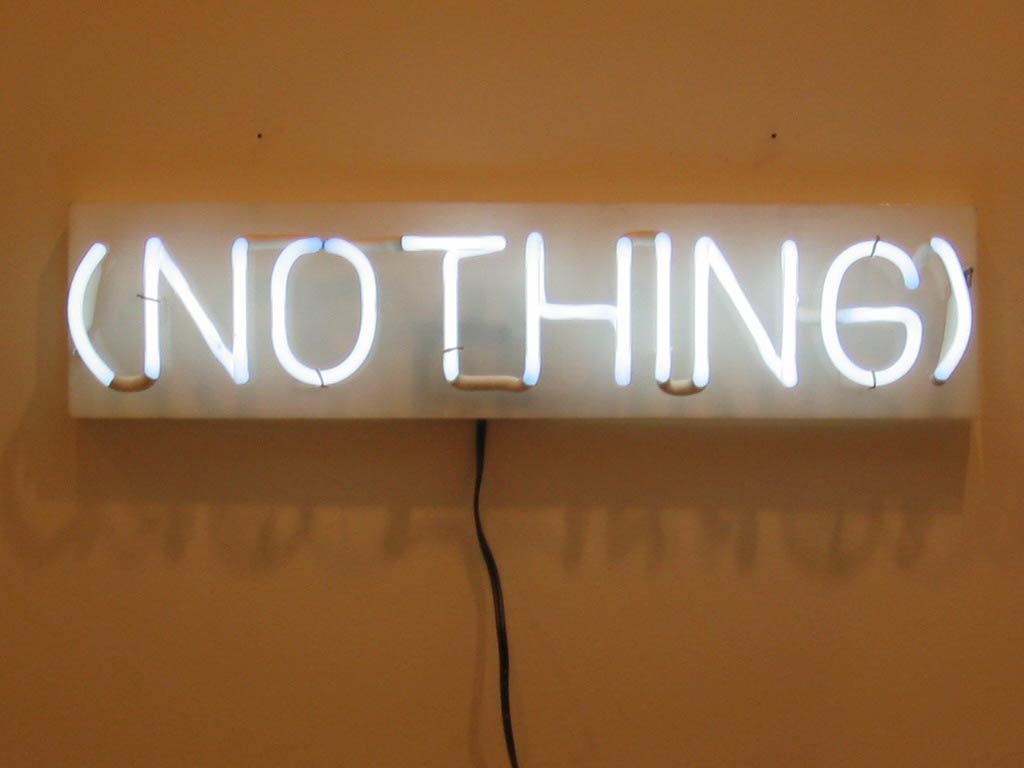 Hmm I seem most of all spidey series. Now I don't remember much out of the 60s/80s stuff. But I knoe the 90s+ ones have shown some problems with peter life have been plotpoints in episodes.

"The 'Ultimate Spider-Man' version Iron Fist is definitely a Danny, and not a Daniel, Rand. Unlike some other super heroes on his team, he isn't given to big mouthy boasts or wild displays of teenage angst. Danny embraces a go-with-the-flow attitude. Stepping out from the confines of K'un L'un into the madhouse of New York, Danny tends to look at everything with a wide-eyed sense of the new that offers a unique perspective vs. his more jaded fellow trainees. But don't be fooled, beneath that kick-back demeanor is the most deadly kick in the world...and, of course, an iron fist." 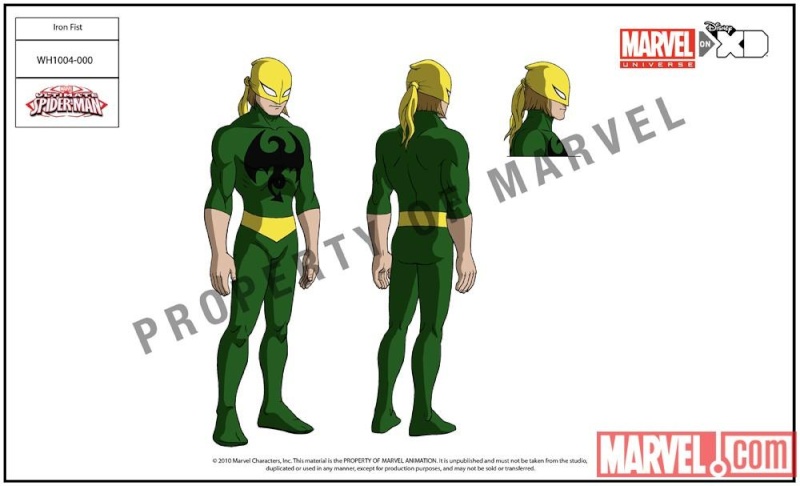 Fans may not be familiar with the new White Tiger just yet, but that will change once she joins your Friendly Neighborhood Wallcrawler in “Ultimate Spider-Man,” beginning April 1!

The young super heroine will join Spidey, Iron Fist, and two more heroes as part of a special team-in-training that will form Peter Parker’s core supporting cast in his new animated adventure. But who is the White Tiger, and what brings her to this team of S.H.I.E.L.D. trainees?

“As a legacy heroine and the newest in a family of heroes to use the White Tiger name, Ava feels she has a lot to prove to S.H.I.E.L.D., to her teammates, and to herself,” divulges “Ultimate Spider-Man” Creative Consultant Paul Dini. “It's important to her that she excels at everything she does, as she plans on leaving the team someday as a full super heroine in her own right. She was Fury's fair haired girl until Spider-Man showed up, and she wants to show the newbie that despite his rep as a solo hero, he still has a long way to go toward earning her respect.”

“She’s really into S.H.I.E.L.D.,” elaborates Supervising Producer Cort Lane. “She would love to be the next Black Widow. She enjoys the S.H.I.E.L.D. training, and she thinks the Helicarrier’s the coolest thing in the world.”

The White Tiger doesn’t have a large history in the comics, but while she’s never typically been associated with the Webhead that freshness brought a new and interesting dynamic to the series.

“We wanted a young female voice on the team and while she is new, White Tiger proved to be the perfect choice,” explains Dini. “She's tough and smart, and her cat-like reflexes allow her to match Spider-Man leap for leap in agility. Also, Spidey's wisecracking attitude really rubs the more serious Tiger, a.k.a. Ava Ayala, the wrong way, which gives us a lot of character conflict when they are trying to solve a bigger problem. It's fun to make sparks fly when you're writing for two contentious teammates.”

And while Lane finds there’s “less pressure in keeping continuity for her” given her relatively shorter history in the comics, he promises viewers “will find over time that her origin is closely connected to the original White Tiger and is linked to the Marvel Universe in really interesting ways.”

“We were free to experiment with her powers, her history and her look until we came up with a character that fit the unique tone of our show,” echoes Dini. “That said, White Tiger is very much a heroine in the classic Marvel mode, and while she is new, there's something about her that seems very right in Spider-Man's universe. Cool powers, defiant attitude, compelling backstory, it's like she's been there all along.”

While Iron Fist, revealed yesterday as a member of Spider-Man’s super heroic supporting cast, provides a more calming influence on the group, White Tiger brings her own unique temperament to the mix.

“Like her namesake, White Tiger is tough, proud, and when the chips are down, will fight to the very end,” says Dini. “She's in there fighting it out side by side with the boys, or throwing them around if they get in her way. She's as smart as she is strong, and while brainwork comes easily to Peter Parker/Spider-Man, White Tiger is more focused and a much better student. You also get the idea that Ava has to work harder to keep the savage Tiger side of her nature in check. Without discipline, she could be one claw pop away from becoming Wolverine. That's why she is a bit of a control freak and a girl who pushes herself to be better than her teammates.”

Come back to Marvel.com later today to learn who else will join your Friendly Neighborhood Wallcrawler on "Ultimate Spider-Man," premiering April 1 on Disney XD! 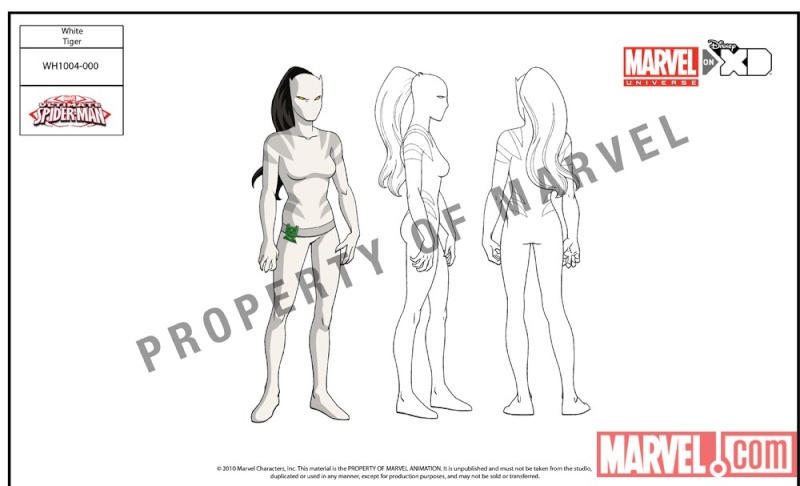 Luke Cage will lend his strength to the team of young super heroes in training as part of the regular cast of “Ultimate Spider-Man”!

When the show premieres during the Marvel Universe block on Disney XD on April 1, fans will meet a teenaged Cage—a.k.a. Power Man—as Spidey joins up with a team of S.H.I.E.L.D. trainees that also includes Iron Fist, White Tiger, and one more hero.

And with writer Brian Michael Bendis, who has long written Cage’s adventures in the comics, acting as Consulting Producer on the series, fans may be tempted to accuse him of playing favorites.

“There are some people who are more familiar with my work, who are going to think that I shoehorned Luke Cage into yet another project,” admits Bendis. “I completely understand why that may seem to be the case, but Luke was on the team before I was on the team. As far as this cartoon went, it was something that the guys had put together before I had joined on.

“But it is fun to write him as a teenager, and I do sort of write him with the knowledge of the man he’s going to become. That’s kind of the way I wrote the Peter Parker in ULTIMATE SPIDER-MAN [the comic series] for many years. You’re writing the teenager who you know will one day become the Peter Parker we know and love. This is the Luke that will eventually become Luke Cage.”

“He’s a little more carefree,” adds Head of Marvel Television Jeph Loeb. “While he’s got street smarts, he doesn’t have the same troubled past as the adult Luke has.”

Both Bendis and Loeb see many of Cage’s core characteristics reflected in the Power Man we’ll meet in “Ultimate Spider-Man,” ensuring he remains the same character.

“What we like about the ‘Ultimate Spider-Man’ Luke Cage is that he’s still instilled with his fierce sense of loyalty and family,” comments Loeb. “It’s an important theme to the new series and Luke embodies that well.”

“I find him to be a very noble character,” remarks Bendis. “That is not a word he would use to describe himself, which I think is the definition of nobility. He’s the one that’s the least neurotic about his heroism. [For him], that’s what you do--you get super powers, and you do the right thing. There’s something very cool about that. He’s kind of like the rock of the team, just by the nature of him standing still, feet firmly on the ground, the others bouncing off of him. It’s a nice chemistry.”

Fans will know that Power Man and Iron Fist have a long history as a crime-fighting duo in the comics, and their interactions in “Ultimate Spider-Man” will pay tribute to that partnership.

“If there’s anything not broken in comics, it’s the dynamic between Iron Fist and Power Man,” elaborates Bendis. “They’re like the Laverne and Shirley of comics. They’re the Odd Couple. They’re fantastic together. And that dynamic only gets more interesting with the connection of the other three teammates. No matter what happens on the team, these two are good.”

“They are best of friends--much like in the comics--but as teenagers we can see the less-than-responsible side of these heroes as well,” promises Loeb.

Come back to Marvel.com tomorrow to learn the final hero that will join your Friendly Neighborhood Wallcrawler on "Ultimate Spider-Man," premiering April 1 on Disney XD! 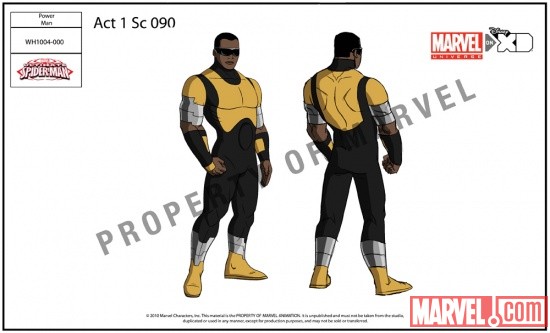 Just not digging it.

Apologist Puncher wrote:Just not digging it.

How many animated shows has Spider-Man had lately anyway? I swear to think it's been a bunch (and the best was that Spectacular Spider-Man series from a few years ago). As with the reboot this is likely intended to assist in hyping, I don't see the necessity of this thing.

thecolorsblend wrote:How many animated shows has Spider-Man had lately anyway? I swear to think it's been a bunch (and the best was that Spectacular Spider-Man series from a few years ago). As with the reboot this is likely intended to assist in hyping, I don't see the necessity of this thing.

And now this one.

There is stuff I do like for the show. But there is some things I don't. But they do have a good crew on it. So I am going to give it a shot.