non_amos wrote:I find this to be true myself. Say I've downloaded umpteen albums. Some are bands I care about & already know about, others I may have never heard of. But here's the kicker. If the album is really good, I mean like, you literally 'play it every day' good, then I actually want to go buy the real thing. Now, due to income that doesn't always happen but sometimes it does happen. I might even buy the sucker new if I'm in Walmart, Target or Best Buy & the price is reasonable like those specials they run. OTOH, if the band and/or album sucks, then I feel no desire to buy it or even wear it out listening to it. So actually, these 'free downloads' can actually be like a form of advertising if you really think about it. I'd dare say the same principle can apply to films as well because even if you saw it online, if you happen to be at one of said stores & the Blu-Ray is on sale, then what's gonna happen? You're gonna buy it of course. However, if the film sucked online, you feel no obligation to waste money on it.

Yep. I think it increases consumer awareness in ways Big Media simply isn't comfortable with... or maybe even aware of.

But here's the thing, notice that they're going after MegaUpload. Does MegaUpload really have the money to defend themselves? Probably not. All the banner ads in the world and I'm convinced their profits weren't huge.

YouTube? Different story. Interesting, isn't it, that YouTube seems to be strictly hands off. Nobody's going after them. Well why the hell not?! Which is easier to do? Surf a bunch of warez sites searching for some bullshit mp3 or video or just streaming the song through YouTube? This isn't thecolorsblend talking his bullshit just like always. I'm literally doing it right now.

Sure, I could "record" the song (or even the video) directly off YouTube. But why? It's easier to just stream the shit whenever I want it. Can somebody explain to me what the fuck THAT is doing to Dougie MacLean's bottom line (nothing against him, he's just what I've got going now)? He's not seeing one fucking cent off that YouTube video. But somehow YouTube is hands off because (A) they have the mojo to stand up for themselves and (B) they're useful to Big Media as a distribution channel for other content.

And guys, you'd have to go to the utmost depths of the Republican or Libertarian Parties to find a bigger, better, badder, angrier capitalist than me. When I criticize Big Media, I'm not criticizing capitalism, the profit-motive/profit-layer or anything else; I'm only criticizing their fucking hypocrisy.

I find something interesting about Youtube. Take KISS for example. Gene Simmons has gone on record about 'freckly-faced college kids' stealing his music online & that they ought to be sued for their houses, their cars, I suppose even their first born. Yet KISS videos are all over Youtube! As a matter of fact, if you go to www.kissonline.com or www.genesimmons.com as well as other sites that they have officially sanctioned, you'll see Youtube vids even embedded on the site for crying out loud! Some of it is concert footage, both recent & vintage. Some of it is recording sessions. Some of it is just crap. But you get the point? And keep in mind, some of this concert footage is uploaded by fans who were at the concerts! Yet Gene & Paul allow that but want to go after people for the other?! Like you said, HYPOCRISY!

EDIT TO ADD: Although unrelated to the above but due to being on Youtube tonight I found the following:

For some reason the video itself ain't showing up but anyway, it's simply the State of the Union speech from Tuesday night that i missed due to being at work. But my point? Even 'the Administration' is using Youtube. Take down Youtube at your own risk, I'm telling yas!

ya where they get figures like that. Sure piracy has cost companies money for yrs. Whats the real figures who really knows there. As for total censorship of internet that would suck alot. We should have the freedom to do what we like on the internet as it was design for and all that. Yes the pirate sites are bad. So either take them down, or like others have like naspter make them become official santition sites and all that. For every time that happens new non ones pop up. As for megaupload, i never really dl stuff from them specifically. I used them more for streaming.

As for megaupload, i never really dl stuff from them specifically. I used them more for streaming.

Believe me, the downloads were lightning fast! It was almost unbelievable compared to others who might take between 10-20 minutes if not longer in some cases. As for streaming, I used to watch movies on Megavideo & would really get frustrated. I'd watch a little over 1 hour & the screen would freeze up with a warning about how I'd used up my allotted 'free' time. I'd either have to wait like 56 minutes to resume or..... pay to become a 'premium' member. But I found a way around that. I'd open the same film twice. I'd pause the 1st one from the beginning but on the 2nd tab I'd pause it at, you guessed it, just over the 1 hour mark. That way I could watch the entire movie without the crapola.

Ya know, you mention Napster. They were supposed to have become a 'pay' site right? Yet I hear it referred to as being 'dead'. Well, whether they are or not, why couldn't the same logic have been used for MegaUpload? If copyright holders are so concerned about their precious material, then why not get a 'cut' from the premium paying members on MegaUpload? What I mean is, if people are already paying for a service anyway, just get a certain percentage from said 'profits' to cover themselves. It might would mean you'd have to be a paying member then but if the monthly fee was still reasonable for unlimited access, it could be worth it and could be a solution?

Totally they should have made it a pay/legal site like others ave done. But like I said when one does that more "illegal" ones would come about.. for me ya I hated that time limit thing. But stuff I was streaming from there was only half hr/hr long in length.

webhead2006 wrote:Totally they should have made it a pay/legal site like others ave done. But like I said when one does that more "illegal" ones would come about.. for me ya I hated that time limit thing. But stuff I was streaming from there was only half hr/hr long in length.

You obviously don't understand the hoops you have to jump-thru when you make a download site "legal".
_________________
BJ Routh and Bryan Singer WERE the worst thing to happen to Superman since Bepo the Super Monkey.

No I don't, but i was just agreeing making it a pay site would have been a nice option for the folks. But ya I don't know the legalize stuff about that.

I think this fits best here: 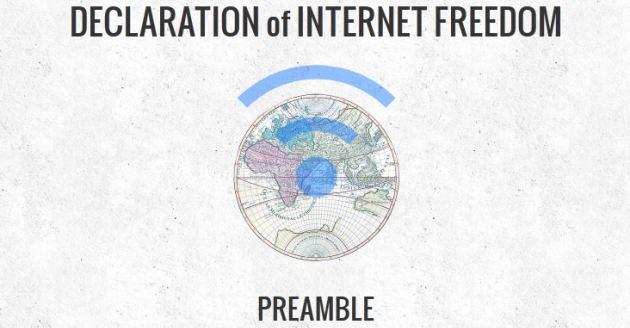 It's no secret that various parts of the internet have been under attack for some time. Traditional media companies respond with terror at the thought of losing even more business to piracy (though it's questionable just how much they're actually hurting). Cable internet providers want the right to control what speeds you're allowed to access what sites at. And the U.S. government, meanwhile, wants to help these companies out by making streaming copyrighted content punishable by up to five years in prison.

Some major names on the internet have had enough of playing defense. That's why they're launching a new initiative called the Declaration of Internet Freedom. It's a short five-point document — a Bill of Rights of sorts — that lists out the basics of what humanity should expect and deserve from the internet. It reads:
"We stand for a free and open Internet. We support transparent and participatory processes for making Internet policy and the establishment of five basic principles:

Openness: Keep the Internet an open network where everyone is free to connect, communicate, write, read, watch, speak, listen, learn, create and innovate.

Innovation: Protect the freedom to innovate and create without permission. DonÃ¢Â€Â™t block new technologies, and donÃ¢Â€Â™t punish innovators for their users' actions.

The Declaration of Internet Freedom is supported by a number of well-known, high-tech names, such as Mozilla (creators of Firefox), the American Civil Liberties Union (ACLU), left-wing political opinion site Daily Kos, and right-wing blogging heavyweight Patrick Ruffini. By backing the document, the organization hopes to promote understanding and build support for the cause. Private individuals are urged to take action through partner sites such as the non-profit Electronic Frontier Foundation.

Long overdue. What we've seen up to now is a bunch of big media outlets attempting to dictate the rules of the game in this brave new online world. Any successful idea will eventually attract "managers". You know the type, the ones that have to "guide" the success of a product, person, idea, service or whatever to "help it reach full potential". The US government in most cases could be lumped in there. They didn't build anything, they didn't plant anything, they didn't refine or import anything, they've worked in the public sector their whole miserable lives, but damned if they're not going to regulate and tax the fuck out of your business.

A lot of app developers for things like iPhones and Droids and whatnot are running headlong into this very problem. As their apps become more popular, they realize that their creativity and innovation is being stifled by The Powers That Be. People always want to assume that the hip young gunslingers perpetually vote a certain way in elections but considering what they're facing these days... well, we may be surprised how things shake out in future elections.